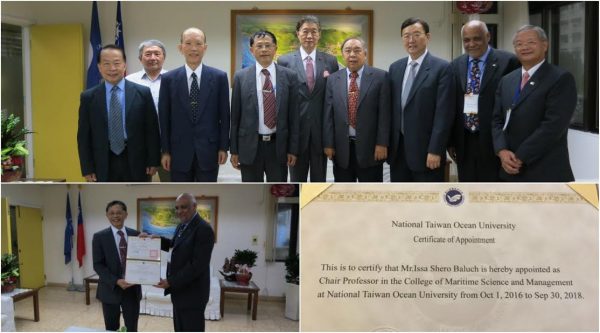 The certificate of appointment was awarded by none other than NTOU President C.F. Chang at the NTOU campus and witnessed by Deans and Professors.

“Issa’s global knowledge of logistics particularly the African perspective will be a great asset to NTOU and our affiliates,” C.F. Chang remarked.

“It is with great honor that I accept this new academic position, which strengthens my commitment to the transport logistics and supply chain industries. Hopefully, in my two-year tenure at NTOU, I will be able to demonstrate teachings that will inspire innovation in maritime science and sea transport logistics,” Issa added.

Issa, a 2012 Senior Advanced Leadership Fellow at Harvard University, is also the Chairman of First Hectares Capital, an agribusiness and forestry infrastructure investment company for Africa, as well as the African Agribusiness Knowledge and Innovation Leadership Initiative (AKILI), a US-based non-profit organization that provides a financially, socially, and environmentally sustainable farming system in four African countries that is scalable, builds capacity, and globally competitive.

For his outstanding services to the international air cargo industry, Issa has so far received two Lifetime Achievement awards: in 2006 presented by Air Cargo News UK, and in 2013 presented by STAT Trade Times. In 2016, Issa won the International Business Excellence Awards in the Inspirational Male Leader category for his remarkable work in AKILI.