Air cargo airlines across the globe received recognition for their excellence in the industry.

The awards, organised by STAT TIMES, an international multimodal transport media house, were presented at a stylish gala event held at the Barnyard Theatre in Rivonia, north of Johannesburg. The South African Minister of Public Enterprises, Minister Malusi Gigaba was the keynote speaker.

The event was part of the Air Cargo Africa 2013 Conference that is currently taking place at Emperors Palace in Johannesburg’s east rand.

The company has been recognising and awarding excellence in the air cargo industry for the last 26 years, placing a special emphasis on excellence in performance by air cargo operators.

The International Awards for Excellence are instituted in various sectors of the air cargo industry. The recipients of the awards are nominated and voted for by the worldwide readers of STAT TIMES via an online poll that ran from 01 January 2013 to 31 January 2013.

Congratulating the winners, Priyo Patra who is the Director of Events and Marketing from STAT TIMES, said that it is important to recognise excellence in the logistics industry chain. The winning airlines are not only applauded by the industry, but by their satisfied customers as well.

The Lifetime Achievement Award awarded for meritorious service of excellence in the air cargo industry was awarded to Mr Issa Baluch, Chairman of Africa Atlantic Holdings Limited (Dubai) and 37-year veteran of the freight forwarding industry. Award winners were awarded to the following operators:

Mr Tlelima Makhetha, GM SAA Air Cargo said that the event of this magnitude provides cargo operators with the opportunity to showcase their strategic role in global trade industry.

“All the operators that are gathered here, contributing at the strategic air cargo industry discussions, indicate strong commitment to the growth of the industry in Africa. These awards further reinforce the commitment by operators to excel and continue to provide world class freight forwarding services,” he added. 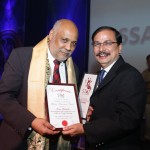 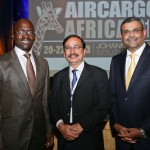 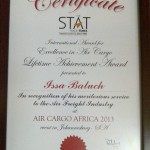 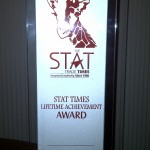